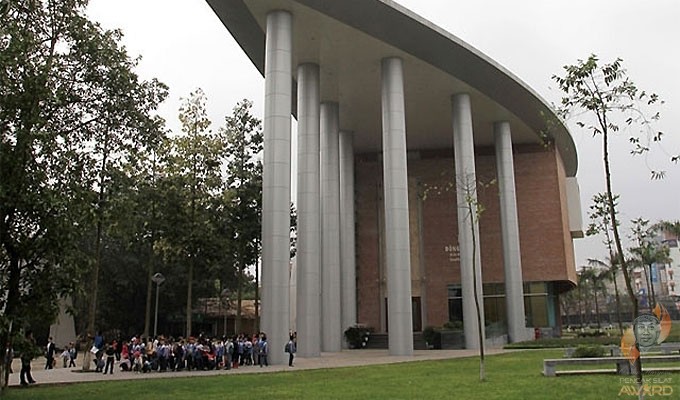 Located inside the Viet Nam Museum of Ethnology (VME), the Southeast Asian Museum has been a rendezvous spot of Southeast Asian nations with a permanent exhibition displaying the diversity and similarities among the cultures and lifestyles of the countries.

According to Associate Professor, Doctor Vo Quang Trong, the museum’s director, the idea for the establishment of the kite-shaped museum was shaped over ten years ago.

The museum was opened to public in 2015 after six years of construction, which was a joint effort of Vietnamese and French experts.

It is the first museum specialised in showcasing the Southeast Asian culture, which was built with a vision to connect Vietnamese culture and the cultures of other countries in the region.

The scientists and researchers presented their valuable collections to the museum with a belief that they will be preserved and promoted to the public in the best way.

Prof. Le Thanh Khoi’s collection, in particular, includes over 300 objects representing cultures of different continents and civilisations. The objects, dated back to different periods of time, are assorted in types, materials, techniques and uses.

Prominent among them are masks of African tribes, jewellery of people in Oceania and Latin America, worshiping objects and decorative items.

The museum’s directory board had to exchange letters and visited Prof. Khoi to discuss how to exhibit the objects true to his aspiration and ideas.

Aside from the three collections, the museum is also home to nearly 400 objects, maps, articles, videos on the cultures of Southeast Asian peoples, which are displayed on a total area of 500 square metres of the museum’s first storey.

Focusing on five major topics of clothes, daily lives, social life, performing arts and religions, the exhibition space provides visitors with a glimpse of the diversified and united culture of Southeast Asian region.

The exhibits, many of which are hundreds of year old, were collected by the museum’s staff members, who had to study the typical cultural identities of each Southeast Asian country.

They received enthusiastic support from the national museums of the countries as well as local residents in collecting objects.

The third storey is designed for temporary exhibitions and exchanged exhibitions from other museums in Southeast Asia and the world, while the top floor is devoted to conservation.

Two years after it was inaugurated, the Southeast Asian Museum has promoted the region’s cultures to visitors while contributing to boosting Vietnam’s international integration.

Vietnamese visitors to the museum are offered an opportunity to broaden their understanding of the culture and the life of their neighbouring countries in the region. It has also helped students and researchers enrich their knowledge in Southeast Asian cultures.

According to the director Vo Quang Trong, the museum will step-by-step, develop different exhibitions with related activities to introduce the cultures and lives of Southeast Asia, as well as those of the world.

It will also host performances by inviting native artists and native traditional handicraft artisans to introduce their countries’ cultures and traditional practices to visitors.